The Ramones are the unofficial baby daddies of punk rock music. Yet they never had a #1 hit, they absolutely hated each other, and all of the original members are already tragically deceased.

Still, the music and the legend live on. > Read more

The Ramones were formed in Queens, New York in 1974, and all of the band members adopted the surname "Ramone" to denote family-like unity. Ironic, since for more than two decades they hardly spoke offstage. Originally, the Ramones consisted of Joey Ramone (Jeffrey Hyman) as lead singer, Johnny Ramone (John Cummings) on guitar, Dee Dee Ramone (Douglas Colvin) as bassist. Tom Erdelvi, aka Tommy Ramone, managed the group, later assuming role of drummer. The name was borrowed from Paul McCartney, who used it as an alias when checking into hotels.

The trio took the stage donned in ripped jeans, sneakers, and leather jackets, looking very brotherly, spewing hard-hitting sounds and screaming lyrics that gave birth to a new genre of rock music -- punk. The Sex Pistols, Stooges, and New York Dolls might have laid the groundwork for punk, but the Ramones brought it to the masses, with violent lyrics, a stripped-down musical style (4 chords and an infectious melody) that was both fast-paced and revolutionary. Kids were growing tired of the sappy-sweet Beatles; brand of rock, looking for something edgier and angrier. The Ramones delivered.

Yet they made their mark virtually without critical acclaim, hated by much of the music industry. Most probably, much of the groundwork laid across genres -- from punk to metal, alternative to mainstream hard rock -- came from the Ramones. The Clash, Metallica, Nirvana, Misfits, and Green Day all borrow somewhat from the music of the Ramones.

Their musical inspirations were the traditional lineup of suspects -- Elvis and the Beatles, the Stones and other acts of the British Invasion. But it was probably their tragic background, rather than their musical predecessors, that catapulted the Ramones from local nightclub performers to international prominence. Most of the group came from unhappy homes and dysfunctional families, but instead of turning to the violence of New York's street gangs, they instead threw themselves into the creative act of making music. Even if it was distinctively violent music.

According to Rolling Stone, Dee Dee Ramone once penned, "People who join a band like the Ramones don't come from stable backgrounds, because it's not that civilized an art form. Punk rock comes from angry kids who feel like being creative." 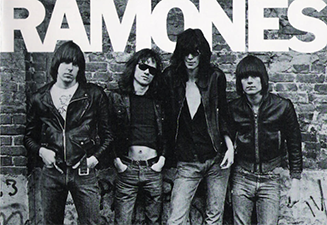 Their self-titled debut album came out in 1976, produced for a meager $6,000. It did manage to reach #111 on the American charts, earning them a trip to the UK, where the audiences were more accustomed to embracing radical new sounds. Their second album came out less than a year after the first, kicking off a musical legacy and almost non-stop touring that would span the next two decades.

The years saw some roster changes, dabbling more into bubblegum rock and 60's era pop music, and barely cracking the Top 10 on the British charts with one single, "Baby I Love You". Unfortunately, their crossover to mainstream music didn't succeed. They managed to alienate most of their punk-leaning fan base, and never really pleased music critics or pop fans, leaving little in the way of support for their efforts.

By 1984, the Ramones realized the error of their ways, returning to their punk roots and producing a somewhat redeeming album, Too Tough to Die. But that was not a long-lived run, as their following album, Animal Boy, went right back to a more conventional, stylized sound. Their closest step to mainstream fame probably came when their song "Pet Sematary" was included on the soundtrack for the Stephen King book-turned-movie of the same name.

By the early 1990's, the band's nonstop drowning-the-woes lifestyle caught up with them. Marky and Joey both ended up in rehab for alcohol abuse, but were able to pull themselves up by the bootstraps and produce another album in '92. But the resurgence wasn't too long-lived. The band broke up in 1996, going out with a series of heartfelt fare-thee-wells to fans, including the release of their goodbye album, ¡Adios Amigos!, an appearance at the Lollapalooza festival, and a farewell tour. 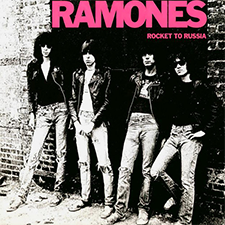 In 2002, the Ramones, with no hit records and not a single hit single, scored a much-deserved induction into the Rock and Roll Hall of Fame. In 2011, they received additional acclaim when they were graced with a Grammy Lifetime Achievement Award. Though it took a whopping 38 years, their first album, Ramones, reached Gold status in 2014.

Billy Rogers, a Ramones session drummer, passed away from complications of pneumonia in 2001. Joey Ramone also passed in 2001, from lymphoma, never witnessing their acclaim. Tragically, Dee Dee (who thanked no one other than himself, jokingly, at the induction ceremony), died of heroin overdose just 3 short months after their induction. Johnny soon followed, losing his battle with prostate cancer in 2004. Fellow musical acts Pearl Jam and the Red Hot Chili Peppers held benefit shows to help raise money for his cancer treatments.

Only Marky and C.J. Ramone remain among the living members of the recognizable Ramones lineup, though the are not in touch with one another. Feuding, in classic brotherly Ramones style.

Every record store has a featured artist showcase... Well, here's ours for Ramones. In this section you'll find our recommended Ramones vinyl and merchandise.

Every record store has a featured artist showcase... Well, here's ours for Ramones. In this section you'll find our recommended Ramones vinyl and merchandise.

Ramones t-shirts, awesome band hoodies and jackets - we have a ton! Shipped directly to your home from our Rockmerch warehouse, it's the best way to bring iconic Ramones apparel and merchandise to your doorstep! Browse our awesome collection of Ramones t-shirts today!

From Ramones buttons to patches, to Ramones magnets, stickers and posters, your friendly neighborhood record store has all the Ramones merchandise you could ever hope to find. And thanks to the magic of the Internet, we can ship your Ramones merch straight to your doorsteps. So go on! Browse our vast collection of rock merchandise from your favorite bands!

Ramones Beat On The Brat Sticker
$2.99