The phenomenon known as Pantera began in a traditional hub of Southern music, Arlington, Texas, in 1981. But normally, Texas is known for producing Country music acts, not masters of heavy metal. The band was formed by a couple of brothers -- Dimebag Darrell (Darrell Lance Abbott) on guitar and Vinnie Paul (full name Vincent Paul Abbott) on drums -- together with Terry Glaze as lead vocalist. Soon, Rex Brown joined up to replace the official-unofficial "original" bass player, Tommy Bradford. > Read more

In the beginning, Pantera was just another glam band, playing local gigs. But with hard work and perseverance, they quickly cranked out 4 consecutive albums in the 80's, gradually delving into deeper and heavier sounds. By their 5th album, Cowboys from Hell, Pantera had evolved into a brand new style of metal, groove metal. They are credited with being one of the innovators and pioneers of this brand of heavy metal.

Groove metal is sometimes dubbed "post-thrash" or "neo-thrash". Fellow bands Machine Head and Exhorder are also categorized in the grove metal subgenre. Groove metal marries the intenseness and sonic features that denote thrash metal, and puts them to a mid-tempo pace, rarely straying into fast tempo territory. Cowboys from Hell is hailed as the defining album of the groove metal genre.

By the 1992 release of Vulgar Display of Power, their sound had transcended groove metal, featuring an even heavier sound. It was so well received that their following creation, Far Beyond Driven, debuted in the #1 spot on the Billboard 200 chart. That was in 1994. 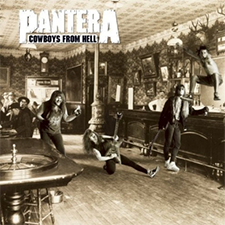 It seemed Pantera was well on their way to superstardom, destined to become metal icons akin to Metallica and Black Sabbath. Alas, it was not to be. In 1986, Pantera put Phil Anselmo in the lead vocalist spot, replacing Glaze. This probably wouldn't have spelled the beginning of the end of the group, except that Anselmo suffered a back injury that led to a downward spiral of drug abuse.

Anselmo's downslide began with legitimate prescriptions for painkillers and muscle relaxers, exploding in slow motion to abuse of these substances and eventually a full-blown addiction to heroin. In 1996, he almost died from a heroin overdose. This led to serious contentions within the band, leading to a 7-year stretch in which they released just one studio album, The Great Southern Trendkill (in '96).

Pantera took a break in 2001, but by '03 it was obvious that Anselmo wasn't able to continue his contributions to the band, which pretty much meant they didn't have one anymore. 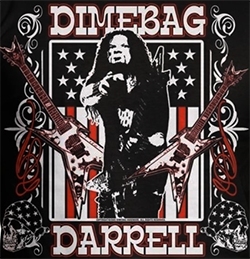 Not to fear, there was plenty of talent to go 'round, even if Pantera wasn't the outlet of choice anymore. Both the Abbott brothers continued on to successful careers. The duo formed Damageplan. But Damageplan was also ill-fated. In 2004, while the band was performing, a crazed gunman began firing shots at the band onstage. Dimebag Darrell was killed with 5 shots to the head, and numerous other band members, security staffers, and workers at the concert venue, as well as some fans, were also injured or killed.

Today, Vinnie Paul plays with metal supergroup Hellyeah, and has written a yet-unpublished cookbook, Drumming up an Appetite with Vinnie Paul. (A supergroup is a band which the members had successful musical careers before its formation.)

Glaze went on to participate in three other groups: Lord Tracy, Blowphish, and his current gig, a party band in his hometown of Bowie, Maryland by the name of The Crayfish.

Rex Brown penned a book, an autobiographical history of Pantera, entitled Official Truth 101 Proof. He now performs as a solo act, taking on roles of both lead singer and guitar player, in addition to his work on bass.

Anselmo went on to form the group Down, as well as a record company called Housecore Records, in addition to a number of side projects. But his most notable foray into the limelight came in 2016, when following a concert he suddenly exclaimed "White Power!" and threw up the traditional Nazi salute. It wasn't the first time Anselmo had been accused of racism, either. Fellow musicians, particularly in the world of metal, were quick and harsh in their response to his actions. He released a statement claiming that he was merely joking, making reference to the "white" wine he'd been drinking (the video shows an extremely drunken Anselmo, indeed), not to actual racial beliefs. He continues to vehemently deny allegations of racism, but it remains a hot topic in his interviews.

In total, Pantera produced 9 albums, selling a total of over 6 million copies as of 2017. With the forever loss of Dimebag Darrell, all hopes for a reunion are for naught.

Every record store has a featured artist showcase... Well, here's ours for Pantera. In this section you'll find our recommended Pantera vinyl and merchandise.

Every record store has a featured artist showcase... Well, here's ours for Pantera. In this section you'll find our recommended Pantera vinyl and merchandise.

Pantera t-shirts, awesome band hoodies and jackets - we have a ton! Shipped directly to your home from our Rockmerch warehouse, it's the best way to bring iconic Pantera apparel and merchandise to your doorstep! Browse our awesome collection of Pantera t-shirts today!

From Pantera buttons to patches, to Pantera magnets, stickers and posters, your friendly neighborhood record store has all the Pantera merchandise you could ever hope to find. And thanks to the magic of the Internet, we can ship your Pantera merch straight to your doorsteps. So go on! Browse our vast collection of rock merchandise from your favorite bands!