During the mid-1970's, punk rock was in full swing, particularly in England. Like most new genres of music, it didn't take long for the sound to make its way across the Pond, inspiring no shortage of acts, including the Ramones, Dead Kennedys, and some lighter, more pop-rock acts, like Blondie. Upon this stage, an even harder form of punk emerged, known as "horror" punk, Goth rock, or hardcore punk, delivered via the Misfits.
> Read more

Misfits Give Birth to Horror Punk

This new brand of punk was born of the (mostly black and white) science fiction and horror flicks of the 50's and 60's. Dark, macabre, violent, and in-your-face, horror punk wasn't heavy metal, but the hard-hitting, screaming and pounding embryo of heavy metal can clearly be heard in those musical acts of the mid-70's. Misfits' playing and performing style is also evident in today's alternative rock. 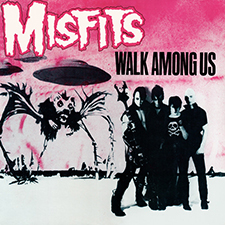 The Misfits became pioneers of horror punk. The group formed in 1977 in Lodi, New Jersey when vocalist and songwriter Glenn Danzig came together with bass player Jerry Only, and drummer Manny Martinez. Over the next 6 years, Danzig and Only were the sole constant Misfits members. By the early 80's, Only's brother, Doyle Wolfgang Von Frankenstein, had signed on as guitar player. The group produced a small collection of singles and EPs, and after Doyle came on board, they began producing full-length albums, including Walk Among Us and Earth A.D./Wolfs Blood.

True to their name, the Misfits didn't even fit in well with each other. They broke up in 1983, Danzig moving on to other musical endeavors, first to Samhain and later forming the group Danzig, which is still intact today.

A lengthy legal battle followed the Misfits' breakup, eventually resolving out of court with Doyle and Only retaining the rights to perform under the name Misfits.

The band reincarnated in 1995, utilizing Michale Graves on vocals and Dr. Chud on drums. This round of production was more heavy metal than old school horror punk. They put out two albums -- American Psycho and Famous Monsters, before disbanding again in 2000. At that point, Jerry Only assumed the role of vocalist and frontman, joining up with Dez Cadena, guitar player for Black Flag, and Marky Ramone, drummer for the Ramones.

This group of Misfits conducted a 25th anniversary tour and released an album made of cover music, entitled Project 1950. The band then underwent even more of a roster shakeup, until 2016, when Danzig, Only, and Doyle got back together to headline Riot Fest, playing together with Dave Lombardo (drum player for the group Slayer) and Acey Slade on 2nd guitar. As of 2011, they had produced 7 studio albums.

In a semi-recent interview, with Rolling Stone magazine, Only expressed that he and the other band members do wish to continue playing together, recording new music, and performing as the Misfits. He told the interviewer, "I think it's got to evolve naturally. The thing is we've tried to plan things, and then we stand there and wait, and as it comes we'll just do it."

Every record store has a featured artist showcase... Well, here's ours for Misfits. In this section you'll find our recommended Misfits vinyl and merchandise.

Every record store has a featured artist showcase... Well, here's ours for Misfits. In this section you'll find our recommended Misfits vinyl and merchandise.

Misfits t-shirts, awesome band hoodies and jackets - we have a ton! Shipped directly to your home from our Rockmerch warehouse, it's the best way to bring iconic Misfits apparel and merchandise to your doorstep! Browse our awesome collection of Misfits t-shirts today!

From Misfits buttons to patches, to Misfits magnets, stickers and posters, your friendly neighborhood record store has all the Misfits merchandise you could ever hope to find. And thanks to the magic of the Internet, we can ship your Misfits merch straight to your doorsteps. So go on! Browse our vast collection of rock merchandise from your favorite bands!