Southerners are ... different. They're known for balancing some of the world's most gracious hospitality and commitment to Christian living with some of the world's hardest partying and rebellious demeanors. They might not have beaten the Union on the battlefield, but by golly, they'll do it on the stage of rock and roll and across the college gridiron, and when that doesn't work, they'll kill 'em with kindness. Just ask Neil Young. He'll remember.

This event prompted them to take some liberties with his name, adding a pinch of Southern twang and perhaps a smidgen of sarcasm, when it came time to rename their band. Beginning in 1964, they had played under the moniker My Backyard; later changing that to The Noble Five, and then One Percent, before settling on the name Lynyrd Skynyrd in '69. It stuck.

The group tacked on a drummer (Bob Burns), a bassist (Leon Wilkeson), another guitarist (Gary Rossington), and keyboardist (Billy Powell), and by 1972, they were playing gigs in an Atlanta watering hole called Funocchio's. Talent scout Al Kooper (of Blood, Sweat & Tears, who was touring with Badfinger at that time) spotted the clan and signed them. Within a year, they had produced their first album, Pronounced Leh-Nerd Skin-Nerd, along with session guitar player Ed King.

At that time, The Allman Brothers Band's signature sound was derived from the 2-lead-guitar assault. Lynyrd Skynyrd upped the ante with 3 lead guitars. While Skynyrd certainly didn't create Southern Rock, they absolutely brought it from regional sensation to mainstream scream. Unsurprisingly, "Free Bird" became an immediate radio hit, Skynyrd 's own living tribute to predecessor and hero, Duane Allman. (The 1980 reincarnation of "Free Bird," without lyrics, was a tribute to the late Ronnie Van Zant.)

Their hardcore Southern Rock has roots in the Blues and Country, overlaid with a veneer of Southern rebellion and hard rock braggadocio. From their debut in 1973 until their staggering loss of most of the band in a plane crash in 1977, Skynyrd released an onslaught of successful albums, including Second Helping in '74, Nuthin' Fancy in '76, and Street Survivors in '77.

The Plane Crash That Changed Everything 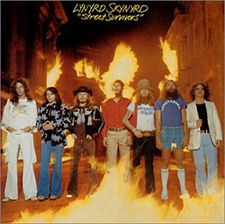 Just three days after the release of Street Survivors, on October 20th, the band left a gig at Greenville Memorial Auditorium in South Carolina headed for another performance at Louisiana State University (LSU) in Baton Rouge. They never made it. Their chartered private plane had engine trouble, causing it to run out of fuel. Though the pilots received permission to divert to another airport in Mississippi, they weren't able to make it. The emergency landing went awry, crashing the plane, and instantly killing Van Zant, Steve Gaines (guitarist), Cassie Gaines (backup singer and Steve's sister), Dean Kilpatrick (an assistant road manager), and both pilots.

In a twist of cruel irony, the original cover for Street Survivors, released just days before the crash, pictured the band amid a backdrop of flames. Steve Gaines' widow requested that they change the album cover, which they gladly obliged, in respect for all the lost and injured. The cover image was replaced with a similar photo of the band, set in front of a plain, black background. For the release of the CD version of the album in 2007, the original cover was reincarnated. In yet another irony surrounding the crash, Street Survivors featured an entire song about death: "That Smell," written by Ronnie Van Zant.

Along with those band members died the heart and soul of Lynyrd Skynyrd. Perhaps most notably, the unique songwriting abilities of Van Zant. The band effectively broke up until 1987, when they reunited for a tour, featuring Ronnie Van Zant's brother, Johnny, on lead vocals. (The three Van Zant brothers were named Ronnie, Johnny, and Donnie. Donnie is most known for his vocals and guitar work with the group .38 Special, making all three of the talented musicians highly successful.)

Unfortunately, the plane crash wasn't Skynyrd's last taste of tragedy. Stringer and vocalist Hughie Thomasson died of a heart attack in 2007 at his home in Florida, and keyboardist "Billy" Powell passed away, also of a heart attack, in 2009.

What would a rock band be without controversy? While "Free Bird" is the unofficial anthem of Skynyrd fans everywhere, "Sweet Home Alabama" is the unofficial theme song of an entire state. Legend has it that Skynyrd wrote it in answer to the liberal swooning of Neil Young in his "Southern Man." Indeed, Skynyrd 's lyrics speak directly to Young's song: "Well I heard Mister Young sing about her; Well I heard ole Neil put her down. Well, I hope Neil Young will remember, A 'Southern Man' don't need him around anyhow."

But Skynyrd and Young never had an actual squabble in real life, and Young later offered some of his writings to the band, though none were ever recorded. Van Zant was even known to frequently wear a Neil Young T-shirt. Nonetheless, "Sweet Home Alabama" remains the "stick it to the Yankees" song of the South, and you won't attend many public events in Alabama the Beautiful that the song doesn't receive serious play time. 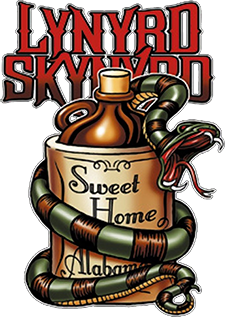 But "Sweet Home Alabama" (reportedly loathed in liberally-dominated arenas like New York) actually isn't the hottest bed of controversy surrounding Skynyrd. That would be their public and outspoken use of the Confederate "Rebel" flag, another iconic symbol of the South. Southerners maintain it's just "heritage, not hate," while critics maintain it is the symbol of a system that enslaved nearly 4 million people.

In an interview, Rossington sought to distance the band from the quagmire of this particular Southern symbol, stating, "Through the years, people like the KKK and skinheads kinda kidnapped the Dixie or Southern flag from its tradition and the heritage of the soldiers. … We didn't want that to go to our fans or show the image like we agreed with any of the race stuff or any of the bad things."

After the comment went public, Lynyrd Skynyrd's fan base wasn't happy. Rossington later published a clarifying statement on the band's official website: "We still utilize the Confederate (Rebel) flag on stage every night in our shows, we are and always will be a Southern American Rock band, first and foremost." Indeed, the flag features prominently in their onstage performances, and ticket sales reflect no ill will between the fans and Skynyrd or Rossington.

Aside from the requisite drinking, drugging, and roughhousing that's simply cliché in the world of rock and roll, Skynyrd's other big controversy came in the form of a lawsuit the band levied against former drummer, Artimus Pyle. Pyle, together with Columbia Records, planned to release a biopic (a biography in the form of a movie) called Street Survivors: The True Story of the Lynyrd Skynyrd Plane Crash.

At the end of the summer of 2017, U.S. District Judge Robert Sweet ruled that Pyle's participation in the film would violate the consent order he signed with the band in 1988. While Columbia Records was legally free and clear to produce such a film, they had to do so without the cooperation of Pyle, who had provided the footage and script. The judge ruled that releasing the film would result in "irreparable harm" to the brand Lynyrd Skynyrd, including the estates of the deceased band members.

In 1996, the documentary entitled Freebird ... The Movie was released with the help of fellow music legend, Charlie Daniels, who served as a consultant on the film. The movie featured a series of interviews and live concert footage that had never been seen before. VH1 aired a subsequent biography on their regular series "Behind the Music" in 1997, the 20th anniversary of the plane crash.

Lynyrd Skynyrd was inducted into the Rock and Roll Hall of Fame in 2006, and is listed as #95 on Rolling Stone's list of the "100 Greatest Artists of All Time." Rossington, Rickey Medlocke (guitar), Johnny Van Zant (replacing his brother on lead vocals), Mark Matejka (guitar and backup vocals), Michael Cartellone (drums), and Peter Keys (keyboards) continue to play under the name Lynyrd Skynyrd.

But what about the iconic Mr. Leonard Skinner, who unwittingly lent his name to the Fathers of Southern Rock? He passed away in 2010 at a Jacksonville healthcare facility where he was receiving care for Alzheimer's Disease. He was 77 years old.

Every record store has a featured artist showcase... Well, here's ours for Lynyrd Skynyrd. In this section you'll find our recommended Lynyrd Skynyrd vinyl and merchandise.

Every record store has a featured artist showcase... Well, here's ours for Lynyrd Skynyrd. In this section you'll find our recommended Lynyrd Skynyrd vinyl and merchandise.