The 1960's dramatically changed the world of music. The British Invasion made England the de facto capital of the musical universe, and bands like The Rolling Stones, The Beatles, and The Yardbirds ushered in new sounds, built upon legends like Howlin' Wolf, Albert King, Jimi Hendrix, and others. > Read more
It was upon this stage that a new sound burst in, further altering the musical world forever, and literally defining the music of the 1970's.

The Beginning of Led Zeppelin

Led Zeppelin was born in 1968, after The Yardbirds broke up and guitarist Jimmy Page was left standing with the legal rights to the band's name, plus a whole list of concert commitments scheduled that needed to be fulfilled. Page called on guitarist and keyboardist John Paul Jones, vocalist Robert Plant, and drummer John Bonham to fill the gap. All of these musicians had solid musical pedigrees already.

The band's first tour fulfilled Page's obligations under The Yardbirds' name, playing as the New Yardbirds. When they returned to the UK, they renamed the band Led Zeppelin (reportedly an idea of Who drummer Keith Moon), and cut their first album in a mere 30 hours. It hit the #10 spot on the Billboard charts within just a few weeks. They soon kicked off another U.S. tour (in 1969) as an opening act. They've never cut an album that failed to reach Platinum sales levels.

Led Zeppelin was the first of the "album rock" bands, depending on their album sales and concert tickets instead of releasing singles. That didn't stop their songs from becoming massive radio hits, though. Zeppelin also probably fathered the era of "arena rock," packing out some of the word's largest venues.

The Legacy of Led Zeppelin 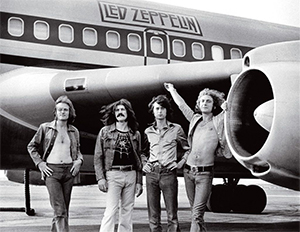 Their heritage in electric blues, rock and roll, and even funk, country, and folk music, wasn't their only draw. Despite lukewarm reception from critics, Zeppelin's fans were (and still are) amazingly enthusiastic. Their adoring public remains enamored with their heavy music, as well as their cryptic and mystical cover art, drawn heavily from the band members' interest and involvement in the occult. The lasting contributions of Zeppelin to music is evident even today, across genres including hard rock, metal, punk, and alternative. But it's The Yardbirds, rather than Zeppelin, that are credited with creating "psychedelic rock." Zeppelin just assured it became more than a passing trend.

Since successful rock bands and controversy go together like peanut butter and jelly, Zeppelin also experienced their share of that, and the legal drama over their alleged music theft continues today. Blues musician and songwriter Willie Dixon sued them for copyright infringement over "Whole Lotta Love" and "Bring It on Home," (he won), and litigation over their massive hit "Stairway to Heaven" is still ongoing between the remaining members of Led Zeppelin and representatives of the estate of Randy "California" Wolfe (a guitar player, songwriter, and original member of the group Spirit).

Led Zeppelin produced 5 number-one hits, shattered concert ticket sales records all over the States (most of which were established by The Beatles), and even formed their own record label, Swan Song. All told, they lay claim to an estimated 300 million total sales, worldwide (111.5 million certified sales), and stand at #4 on the list of best-selling bands in the United States (behind The Beatles, Garth Brooks, and Elvis Presley). With a total of 9 studio albums, they landed eight #1 hit albums in a row in the UK charts. They were inducted into the Rock and Roll Hall of Fame (U.S.) in 1995.

The Ending of Led Zeppelin

The first two years after the band got together, they toured almost constantly. They then scaled back to touring only once every other year, until Plant and his family had a quite scary car accident in 1975, at which point they began touring even less. Due to their involvement in the occult, rumors swirled that some supernatural phenomenon was involved in the accident, further heightening the fans' fascination with Led Zeppelin.

The following year ('76), Zeppelin produced another album and another round of touring in the U.S. Tragedy again struck the Plant family, when his 6-year-old son, Karac, contracted a sudden and fatal infection. The group, understandably, cancelled the rest of the tour, and spent the next 1 1/2 years on a much-needed hiatus.

Toward the end of '78, Plant, Page, Jones, and Bonham began working on another album, which turned out to be their last. In Through the Out Door might not have been the end for Zeppelin, but the wheels of fate delivered another strong blow when Bonham died of asphyxiation (due to vomiting after excessive alcohol consumption) at Page's home in 1980. The band issued a eulogy for not just Bonham, but the entire band, stating "We wish it to be known that the loss of our dear friend, and the deep sense of undivided harmony felt by ourselves and our manager, have led us to decide that we could not continue as we were. -- Led Zeppelin."

Soon, more rumors kicked up that Plant and Page, along with Yes' Alan White and Chris Squire, were planning to begin a new band. The rumored band even had a name, XYZ (derived from ex-Yes and the name Zeppelin), but it never became a reality. Led Zeppelin did release one more album, Coda, in 1982, which was comprised of outtakes and music that had been recorded previously.

But fans weren't left totally without. Both Plant and Page kicked off phenomenally successful solo careers, and those members of the band still with us have occasionally reunited for various performances. An actual "reunion" concert became a reality in 2007 (a performance featuring 16 vintage Led Zeppelin tunes) but there's no real talk of reforming the band, and the successful solo career of Plant, combined with some outside interests the other band members are involved in, will probably keep those rumors at that. Rumors.

Every record store has a featured artist showcase... Well, here's ours for Led Zeppelin. In this section you'll find our recommended Led Zeppelin vinyl and merchandise.

Every record store has a featured artist showcase... Well, here's ours for Led Zeppelin. In this section you'll find our recommended Led Zeppelin vinyl and merchandise.