By 1969, the sickly sweet "peace and love, man" era of the hippies was all but over. The grim Vietnam War dominated the news, as well as the general vibe of the entire world. Across the globe, it was an atmosphere of disillusionment -- the British and American economies weren't what they'd been in the strong postwar boom following WWII. It was something of a dark scene and somber setting. What better climate to roll out a band thriving on darkness? > Read more

Black Sabbath band members have maintained all along that the dark, Satanic imagery are really just an act. At most, the upside-down crosses, bat biting, and lyrics of death and morbidity are simply an experiment. Still, there has always been an air of darkness over the band and their activities, evidenced by massive substance abuse, turmoil and hard feelings, and some lags in their commercial and critical success, at times.

Black Sabbath started in Birmingham, England in 1968, originally titled the Polka Tulk Blues Company, later switching to Earth, and finally landing on Black Sabbath. By then, it was 1969 and their official lineup had stabilized, consisting of lead singer Ozzy Osbourne, guitarist and primary songwriter Tony Iommi (who has remained the only consistent band member since), bass player and primary lyricist Geezer Butler, and drummer Bill Ward.

The story of how Black Sabbath received its name has multiple versions. One version attributes it to a Boris Karloff film by that title. Karloff was an actor credited with roles in numerous ghoulish films, including Frankenstein (1931), The Mummy (1932), and The Terror (1963). The band was playing under the name 'Earth', but when they got confused with another English band of that same name, they grabbed the title off of a movie theater marquee across the street from where they were playing. It just so happened that the film was Karloff's Black Sabbath.

The name Black Sabbath could also have been derived from a song penned by bass player Butler, who was something of a fan of Dennis Wheatley novels. Though dubbed the "Prince of Thriller Writers," Wheatley wasn't just an occult writer. A British military man presented with honors for his contributions to WWII by both the U.S. and Great Britain, Wheatley was the writer whose work inspired the phenomenally successful character James Bond, and he wrote extensively in the genres of adventure, espionage, historical fiction, and even romance, dabbling only occasionally in the occult. That's version #2 of how Black Sabbath came to be named.

'Black Sabbath' the term refers to something holy being turned to evil. A Sabbath, in both Jewish and Christian cultures, is a holy day, marked by worship and usually rest. Adding the black marks it as belonging to the other side: the unholy. 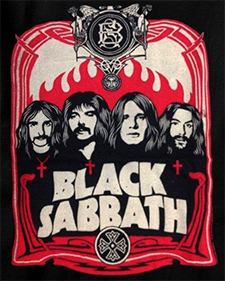 What isn't a matter of theory is Black Sabbath's contribution to the world of music. Hailed as the pioneers of heavy metal, their work helped mold, shape, and define this genre, particularly with their early albums, Paranoid, Master of Reality, and their self-titled album.

One thing that sets Black Sabbath apart from so many other bands is that they managed to achieve widespread, mainstream success, mostly without the benefit of air play. In fact, you hear more Black Sabbath music on the airwaves today than you did when their single 'Paranoid' sold 4 million copies back in 1971.

Black Sabbath blasted through the 1970's, fueled by an impressive 8 million album sales and no small quantities of cocaine, Quaaludes, alcohol, and as Iommi put it in one interview, "God only knows what else." But in 1979, Osbourne's over-the-top substance abuse brought on enough blackouts, out-of-control outbursts, and general troubles for the band to say "enough". Osbourne was replaced by the immensely talented Ronnie James Dio, but it wasn't just about talent levels for the fans. They were enamored with Ozzie, and the band's success faltered from the loss through the 1980's.

By 1985, feelings healed enough to patch up Black Sabbath and hit the stage for the Live Aid concert in Philly, which they repeated in 1992. The band has since held various performances and produced music, both as a group (with an inconsistent team of members), and in their respective solo and extracurricular group capacities. When Black Sabbath performs officially today, you can expect some grouping that includes Iommi, Butler, Osbourne, and on tour, Adam Wakeman on keyboards and Tommy Clufetos on drums.

While frontman Osbourne has always been what connected hardcore fans with Black Sabbath, behind the scenes it is inarguably Iommi who's been the driving force. With his diagnosis of lymphoma in 2012 and long, harrowing series of treatments since, it's uncertain how long the band known as Black Sabbath will actually exist even in sporratic form. The album 13, released in 2013, along with its subsequent promotional tours in the U.S. and Europe, was reportedly the final production for the masters of metal. 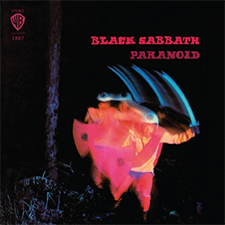 Black Sabbath's music essentially defined heavy metal, but also fits neatly into the subcategory of doom metal. Some of their work has also been defined as simply "hard rock" or "blues rock". They lay claim to some 19 albums, 70 million album sales around the world, and inductions in both the UK Music Hall of Fame (2005) and the Rock and Roll Hall of Fame (2006) in the U.S. In addition to two Grammy Awards for "Best Metal Performance," Black Sabbath was ranked by MTV as the "Greatest Metal Band of All Time" and ranked #2 on VH1's list of "100 Greatest Artists of Hard Rock." Rolling Stone listed Black Sabbath as #85 in their collection of "100 Greatest Artists of All Time".

Whether this is The End or whether the pioneers of metal music have more in store, their legacy will not soon be forgotten.

Every record store has a featured artist showcase... Well, here's ours for Black Sabbath. In this section you'll find our recommended Black Sabbath vinyl and merchandise.

Every record store has a featured artist showcase... Well, here's ours for Black Sabbath. In this section you'll find our recommended Black Sabbath vinyl and merchandise.