Though most decidedly not a religious band, Avenged Sevenfold gets both the band name and many of their album and song titles directly from the Good Book. 'Avenged Sevenfold' refers to the Bible story, written in Genesis (the first book of the Bible) chapter 4 about two sons of Adam and Eve, named Cain and Abel. > Read more

Long story short, Cain killed Abel, and his punishment was banishment by God. Cain was afraid that he'd be found and killed, "And the Lord said unto him, Therefore whosoever slayeth Cain, vengeance shall be taken on him sevenfold. And the Lord set a mark upon Cain, lest any finding him should kill him." In other words, God would avenge Cain's killers sevenfold, or seven times over. Hence, A7X.

'Welcome to the (Metal) Family'

Avenged Sevenfold, like most artists who dare take a step outside the norm, has plenty of detractors. They don't care. Their albums sell, their fans are avidly loyal, and they have no trouble jam-packing arenas and headlining for huge acts, including the reigning kings of metal, Metallica. A7X also spends their fair share as the headlining act these days, thank you very much, haters.

A7X started their careers while still in high school, producing their first album (following a couple of demo releases) entitled, Sounding the Seventh Trumpet. The album title was another biblical reference, this time referring to the last book of the Bible, Revelation chapter 11 verse 15, "And the seventh angel sounded [the seventh trumpet]; and there were great voices in heaven, saying, The kingdoms of this world are become the kingdoms of our Lord, and of his Christ; and he shall reign for ever and ever." Revelation is about the end of the earth, mankind, and this present age. The angels and their trumpets mark a series of judgments God will pass on the earth and its inhabitants for their sins.

Avenged Sevenfold's earliest work fell more into the category of Metalcore than actual heavy metal. Metalcore is a fusion genre, not quite thrash metal, with elements of extreme metal and hardcore punk. Metalcore also features similarities to crust punk and grindcore, and is notable for the musician's dependence on breakdowns, slow and intense, that lend especially well to moshing. Later albums, particularly City of Evil and The Stage, marks a shift in style more towards actual heavy metal and progressive metal, with occasional hints of alternative in the mix. 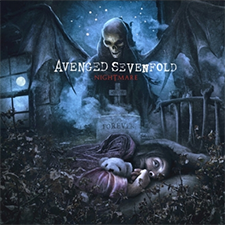 Avenged Sevenfold got their start in Huntington Beach, California in 1999, while still in school. The band consisted of vocalist M. (Matthew) Shadows, guitarist Zachary "Zacky Vengeance" Baker, and later, guitarist Synyster Gates (Brian Elwin Haner, Jr.). Later-joined members include bass player and backup singer Johnny Christ and drummer Brooks Wackerman. Jimmy "The Rev" Sullivan played drums until his fatal drug overdose in 2009, at which time Mike Portnoy stepped in for the album Nightmare and following tour. The prodigy Portnoy was 10 years old at the time.

To date, the band has produced seven studio albums (after their initial two demo releases), the first released twice, under two different labels:

This is in addition to their live album, a couple of compilations, and 18 singles. Avenged Sevenfold is perhaps known as much for their unusual nicknames, otherworldly album art, and band merchandise than for their music. To their credits, A7X lays claim to 8 million album sales around the globe and a not-so-shabby #47 ranking in Loudwire's listing of the "Top 50 Metal Bands of All Time". 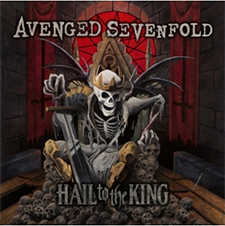 Who are their mentors? Aside from the first human murderer, they credit their style and sound to the likes of GnR, the Stones, Zeppelin, Iron Maiden, Pantera, Motörhead, Metallica, Megadeath, Black Sabbath, AC/DC, Alice in Chains, Suicidal Tendencies, Misfits, Rage Against the Machine, Korn, and other similar metal and punk greats.

Their music also hails elements of hard rock, punk rock, and the occasional ballad. In this respect, they definitely show their GnR and Metallica roots. They've also strayed much further from their metal and metalcore roots, dabbling in sounds borrowed from Country music and even Broadway show tunes in the album City of Evil, a piano ballad in Nightmare, and some leanings toward alternative metal, screamo, and pop punk in their latest album, The Stage. According to M. Shadows, he's tired of screaming. Each album marks a step toward less screamo metal shrieking and more actual singing.

So, what's next? As of this writing in the closing weeks of 2017, Avenged Sevenfold wrapped up a summer tour of the U.S. and Canada, as the main supporting act for Metallica, and several summer shows for The Stage World Tour, headlining several acts including Volbeat, Motionless in White, and A Day to Remember. No word yet on what 2018 and beyond has to offer. Stay tuned!