Revolutionary heroes like Paul Revere and Samuel Adams (mmmm, beer) ... world-renown cuisine like lobster and clam chowder and Boston baked beans ... the glorious four seasons of New England (have you seen those fall colors?), that eastern Massachusetts drawl, and of course, the famous Tea Party ... these are the hallmarks of Boston. Well, those, and perhaps their rowdiest sons, the Bad Boys from Boston, Aerosmith. > Read more

Also dubbed "America's Greatest Rock and Roll Band," Aerosmith began as the U.S. answer to The Rolling Stones, evolving over the years into something much more than merely an answer to the British Invasion. Assembled in 1970 by original members Steven Tyler (at the time, he was drummer), Joe Perry (lead guitar), and Tom Hamilton (on bass guitar) they were soon joined by Joey Kramer (who took over on drums, freeing Tyler to become the iconic frontman he remains today) and Brad Whitford (rhythm guitar). They both lived and worked together in those early days, sharing a little apartment unit in Boston and making almost nightly rounds of the Boston and NYC club scenes. 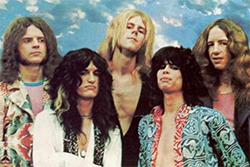 It didn't take long for the talented bunch to catch the eye (well, ear) of Columbia Records' Clive Davis, who promptly signed them. By 1973, Davis scored them some much-needed airplay for their debut single, "Dream On," which still graces the airwaves frequently today.

Like their predecessors, The Stones, The Beatles, and Zeppelin, Aerosmith borrowed heavily from the realm of blues, pumping in some hardcore funk and metal-rock in the mix, in turn, sparking other soon-to-be musical greats, like Van Halen, Mötley Crüe, G'n'R, and a fair number of the Glam Rock/Hair Bands that rose to prominence in the 1980's.

By the late 70's and early 80's, inner turmoil, fueled in no small part by over-the-top drug abuse, took its toll. Record sales went down and band dissention went up. There were some shakeups among band members, as well as their support staff, including Perry, one of their strongest songwriters. He was replaced by Jim Crespo. Whitford left, as well, replaced by Derek St. Holmes.

By 1984, they realized something had to give. Most notably, they had to practice some forgiving and forgetting, managing to do what few rock bands every do successfully -- reunite the original members and get back to their roots. This produced one of the most successful comebacks of a rock band ever achieved.

Aerosmith became passionate and vocal in support of sobriety. Their music became more "commercial," but fans responded overwhelmingly positively, embracing their return to the power-ballad music steeped in blues, funk, and rock and roll that originally made them famous.

Aerosmith Prepares to 'Fly Away From Here' 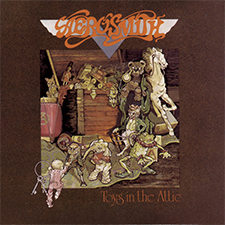 Though Aerosmith had hits, fans, and successes from the early days, their resurgence in the 80's and 90's birthed their greatest accomplishments. Standing as the 9th most successful musical artists to date, they've garnered 10 MTV Video Music Awards, 3 Viewer's Choice Awards, 6 American Music Awards, 4 Billboard Music Awards, 2 People's Choice Awards, 16 Boston Music Awards, and a long list of other awards and recognitions, including their 2001 induction into the Rock and Roll Hall of Fame. They've been in movies, TV shows, and even video games. The individual members have also produced a fair number of commercial successes, including Tyler's unexpected tromp in the halls of Country music.

Though the road since their reincarnation in the mid-80's isn't bereft of drama and tragedy, Aerosmith kicked off another tour in 2017. However, this tour is reportedly their "farewell" tour, particularly since it's not quite so easy to perform a grueling act, jetset the globe, and maintain a high level of performance -- particularly for a group that's considerably northward of retirement age. Tyler is 69, Perry and Kramer 67, Hamilton and Whitford 65. No longer spring chicks, a couple of the members have had to quit mid-concert and cancel tour dates due to age-related ailments.

According to Kramer, "Aerosmith is all of our first loves, but I also don't know many other people who have consistently done the same job for 45 years. As we're getting older, we've been kicking the idea [to end the band], but a final decision hasn't been made."

What do you think? Is Aerosmith getting Back in the Saddle? Or, will they fade away and Let the Music Do the Talkin'? Baby, Please Don't Go ...

Every record store has a featured artist showcase... Well, here's ours for Aerosmith. In this section you'll find our recommended Aerosmith vinyl and merchandise.

Aerosmith Back in the Saddle Unisex T-Shirt - Special Order
$28.99

Every record store has a featured artist showcase... Well, here's ours for Aerosmith. In this section you'll find our recommended Aerosmith vinyl and merchandise.

Aerosmith t-shirts, awesome band hoodies and jackets - we have a ton! Shipped directly to your home from our Rockmerch warehouse, it's the best way to bring iconic Aerosmith apparel and merchandise to your doorstep! Browse our awesome collection of Aerosmith t-shirts today!

Aerosmith Back in the Saddle Unisex T-Shirt - Special Order
$28.99

From Aerosmith buttons to patches, to Aerosmith magnets, stickers and posters, your friendly neighborhood record store has all the Aerosmith merchandise you could ever hope to find. And thanks to the magic of the Internet, we can ship your Aerosmith merch straight to your doorsteps. So go on! Browse our vast collection of rock merchandise from your favorite bands!